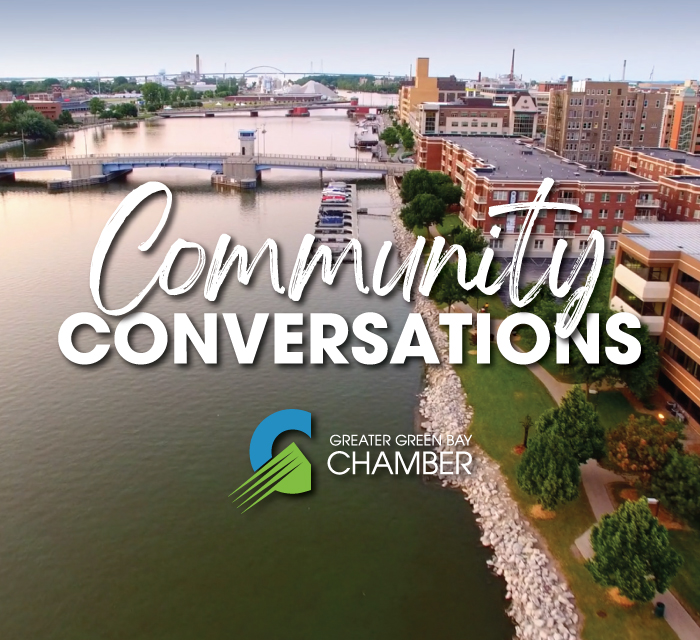 We invite you to tune in each month as our President and CEO, Laurie Radke, sits down with a special guest to learn about their lives, businesses, their love for Greater Green Bay, and the value found in their Chamber membership.

The series builds awareness about the people, purpose, and activities of our region.  It creates opportunities for us to convene, learn from, and deepen our connections with each other by building understanding, buy in, and ongoing participation from those who are dedicated to Greater Green Bay’s success and growth.

Episode 9 of the series introduces you to Corey Behnke, Producer and Co-Founder at Live X. Corey shares his energy and passion for living and working in Greater Green Bay along with where his love for the entertainment industry comes from and what advice he would have for someone looking to pursue a career in that industry. . He also gives insight into his company and his tie to a memorable kiss seen by millions on TV each year.

On this episode of Community Conversations, Laurie Radke’s special guest is Luigi Lazzareschi, CEO of Sofidel Group. Luigi shares more about what brought Sofidel, a Lucca,Italy based company to select Green Bay as a U.S. plant location, how their company continues to find success, and what the future holds for them both in Green Bay and across the country.

Part two of the interview includes Mark’s thoughts on bringing high-speed rail to Greater Green Bay, future goals for the Titletown District, tips Mark would share with his younger self, and what three things the Packers would like to accomplish in the next 10 years.

*This interview was recorded in July 2022.

On this special two-part episode of Community Conversations, Chamber President & CEO, Laurie Radke, is joined by Mark Murphy, President and CEO of the 13-time World Champion Green Bay Packers. Murphy, a former All-Pro safety for the Washington Football Team, joined the Packers in 2007 after 4½ years as director of athletics at Northwestern University.

Mark and his wife Laurie are busy with family and take time to stay intertwined with the Greater Green Bay community. They both take part in various community involvement opportunities, including speaking engagements where they interact with fans and shareholders. Mark has given his time to several community organizations to help their causes, including Big Brothers Big Sisters and serves on UWGB's council of trustees.

Part one of the interview includes Mark sharing what he loves about Greater Green Bay, insight into the creation of Packers Give Back, a look at how the organization continues to innovate and take on new opportunities, and what his outlook is for the 22/23 season. Stay tuned for part two of the interview to be released in August 2022.

On this episode of Community Conversations, Chamber President & CEO Laurie Radke is joined by Mark Skogen, third generation grocer and current President and CEO of Skogen’s Festival Foods. Additionally, Mark leads Boomerang Management properties which includes Capital Credit Union Park, the Green Bay Rockers, and the EPIC Event Center. During this episode, Mark gives viewers a glimpse into his journey and how he strives to give back and enrich the lives of those in the communities served by his companies.

On this episode of Community Conversations, Susan Finco, President of Leonard & Finco Public Relations joins Chamber President/CEO, Laurie Radke, to converse about how she has grown a successful business in Greater Green Bay, her role on the Green Bay Packers Board of Directors, and advice she’s offered to guide others in their careers.

On this episode of Community Conversations, Laurie Radke, President/CEO of the Greater Green Bay Chamber, is joined by Bobbi Webster, Director of Public Relations for Oneida Nation. Bobbi shares what she would want others to know about Oneida Nation, its people and culture, as well as what her outlook is for the future.

On this episode of Community Conversations, Laurie Radke, President/CEO of the Greater Green Bay Chamber, is joined by Steve Van Remortel, Founder/CEO, MyTalentPlanner, Inc. and Stop The Vanilla, LLC.

Steve and Laurie discuss why Greater Green Bay is such a great place to work, live, and raise a family. Steve also provides insight into what it was like starting his own business.

In this very first edition of our Community Conversations series, Chamber President & CEO, Laurie Radke, chats with Brown County Executive Troy Streckenbach. They cover a variety of topics including the Port of Green Bay, Resch Expo and what the futures looks like for the county.